The Fragmented Body, Ideal Self and its depiction in "Zero Degrees"

As already discussed in our introduction, Lacan’s “Mirror Stage” focuses on how a human infant sees an external image of itself when looking at a mirror. This reflected image triggers a response that allows the infant to create the mental representation of an “I”, which refers to the ideal image of one’s self.

The concept of the fragmented body expands on these basic principles of the “Mirror Stage”. Lacan goes on to explain in his reading how the image of a unified body reflected in a mirror does not correspond with the underdeveloped infant's physical vulnerability and weakness; therefore, this unified image becomes the established ideal “I” the infant strives to become throughout his or her life.

“This fragmented body – which term I have also introduced into our system of theoretical references – usually manifests itself in dreams when the movement of the analysis encounters a certain level of aggressive disintegration in the individual. It then appears in the form of disjointed limbs.”

In Lacan's mirror stage, the infant experiences his or her body as uncoordinated, vulnerable, and insufficient. This sense of frustration with physical limitations propels the infant towards trying to identify with a more unified and ideal self-image. However, this form “I” (ideal image) is constantly haunted by the opposite image of the fragmented body which represents the vulnerability of the body. This haunting by the fragmented body manifests itself in dreams, examples of this being dreaming of losing body parts or suffering from mutilating injuries.

Lacan mentions the Renaissance painter Hieronymus Bosch in connection with the fragmented body. Bosch's paintings depict a variety of pierced wounded, and dismembered human figures. An example of this is shown below. 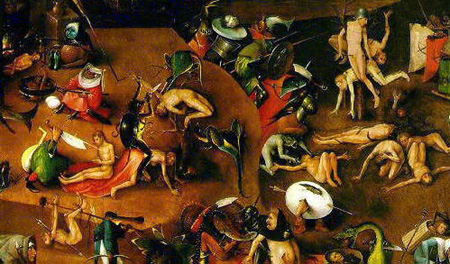 When watching the dance piece “Zero Degrees” by Akram Khan and Sidi Larbi, there are clear examples which relate to the concept of the fragmented body and how it manifests itself within the human mind and how it acts as a potential threat to the destruction of the ideal image, “I”. 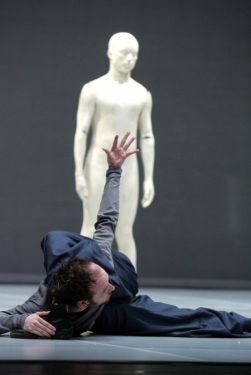 The first example of the fragmented body being shown in “Zero Degrees” is when Sidi Larbi performs a series of movements, contorting his body into various shapes, such as the one shown in the picture. The movement Larbi performs is uncoordinated and shows the physical limitations of the human body, which connotes key concepts of the fragmented body as being weak and vulnerable. Whilst Larbi is performing these movements, there is a white mannequin standing behind him in an upright position, which could therefore, represent the “I” (ideal image) that Larbi is striving towards. The use of the mannequin could also represent how the “I”(ideal image) is always being haunted by the concept of the fragmented body. 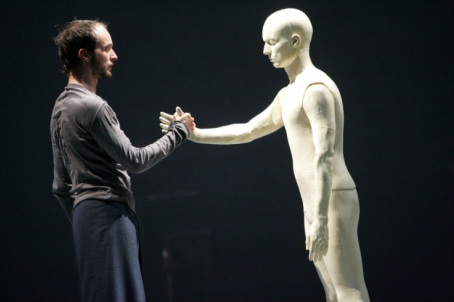 I can therefore conclude that the concept of the fragmented body from Lacan’s “Mirror Stage” is an interesting and thought provoking idea which has several useful applications to dance works and even in everyday life. We have all probably experienced feelings of the fragmented body in our lifetime which is what makes it so engaging as a concept and useful in academic study.